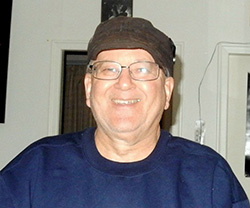 Jim Dupuis of CFBX-FM, 92.5 "The X" in Kamloops, BC
Show: Jazz Notes Wednesdays 5-7 PM PT thex.ca and 92.5 FM in Kamloops
Same host, same show, since May 2001
I have been producing/hosting Jazz Notes for nearly 20 years. Jazz Notes is a mix of contemporary and classic jazz. Each show, when aired live, has a segment committed to traditional jazz called the Big Easy Gumbo Segment. Jazz Notes airs specials for Mardi Gras and International Women’s Day each year.

Jazz Notes is open to live music performances and interviews. Generally, local musicians in other genres are also invited to appear on Jazz Notes, too. I have a personal Facebook page and I manage the Jazz Notes Radio Show page. I contribute blog/photo features to the CFBX website thex.ca. I contribute features to The BIG E-(Edition) is a monthly magazine based in Kamloops, BC, wherein people living in poverty, sell the magazine to the public. Wednesdays 5-6 PM PT thex.ca

2020. Yuck. Being that the progammer/hosts were locked out of the CFBX station due to Covid, it was a particularly challenging year to produce a show. The station could not provide us with digital music and we were not allowed to get hard copy from it. Those that continued doing shows had to do them from home, with their own album collections and whatever equipment they had. I resorted to using earbud headphone microphones, with so-so results. I started off with my usual two hour show, but eventually found it too time consuming to be hunting down music and preparing and recording a show from home. I got permission to do a one hour show. This resulted in removing my Big Easy Gumbo traditional jazz segment, as it took up too much time in a one hour show. It will be back, eventually. I contacted a number of distributors about getting digital music for my show. Happily many record companies, distributors, and artists provided me with product. So, for my Best of list for 2020, I will only consider music that was played on Jazz Notes. As I only consider new recordings from more-or-less, this calendar year, Thelonious Monk, Ella Fitzgerald and John Coltrane's “lost” or “found” albums don't qualify. Music used on my specials on Louis Armstrong, “Miles, Monk and Mingus” don't qualify, but it was good fun doing them. Still, there was some incredible music that came my way in 2020 and thanks to all that kept the show going.

Best local release - Kamloops and BC

Margit Little Sky Project  For The People Independent
First Nations' guitarist/vocalist/composer Rod Bandura, along with his partner vocalist/guitarist Margit Gossage. resurrected songs from a long defunct band called Waskesu, The songs are lovingly recorded and speak of reconciliation, native traditions and saving the planet. The songs can be heartbreaking, but also hopeful. For The People made it to #1 on the SiriusXM Indigenous Music Countdown.
https://margitskyproject.com/

Echo Beach Album Release party for their first full-length album, Whale Songs. Whale Songs is available at: https://echobeachband.bandcamp.com/  Echo Beach rocked the local Plaza Hotel with plenty of special guests from bands like Wrecked Beach and Jackson and the Jims. “Sunday Love” was one of the many highlights.
https://echobeachband.bandcamp.com/
https://thex.ca/2020/03/09/fans-show-echo-beach-some-saturday-love-at-the-plaza/

Most underrated record of the year:

SIPS by Mother Sun. SIPS has elements of psychedelic rock, folk, pop and jazz in it. The musicians have a history of playing together in a variety of projects and it shows as they have become very polished players and composers. In a regular year this album would have received more traction and would be much better known.
https://thex.ca/2020/09/11/mother-sun-releases-new-album-sips/
https://mothersunmusic.bandcamp.com/

.1.Eric Revis    Slipknots Through a Looking Glass    Pyroclastic Records               U.S
Bassist Revis often plays with Branford Marsalis, but here he gets to branch out more. He has excellent musicians playing with him. Kris Davis can use every part of the piano to make a sound and she often does. There are plenty of places for improvisation and each band member takes advantage of that. Very wild in spots. Yet, Slipknots Through a Looking Glass does not dissolve into a dissonant mess. For example, “Earl and the Three Fifths Compromise” sounds like an indy movie film score, while “Shutter” is the one where the reed section goes wild along with constant, rhythmic piano sounds that tie it all together. This inventive mix of classical music, contemporary jazz and improvised music strongly appealed to all my senses.
https://pyroclasticrecords.com/release/slipknots-through-a-looking-glass/

3. Alain Bedard Auguste Quintet  Exalta Calma  Effendi Records   Quebec
Bedard, renowned bassist and owner of Effendi Records, has an all star cast of musicians from the label at his disposal. This version of the Auguste Quintet includes Swiss star Felix Stussi on reeds. This, “august” quintet shows that contemporary jazz can really swing.
https://www.alainbedardauguste.com/

5. Audrey Ochoa  Frankenhorn  Chronograph Alberta
Trombonist Ochoa's album may not be like my Grandma's jazz, but in a lot of ways, that is a good thing. She is willing to experiment with combining strings, percussion, electronic and other sounds to complement her excellent trombone playing. No two tracks are alike and this album is a breath of fresh air during a trying year.
https://chronographrecords.com/artists/audrey-ochoa/

ï¿½ 1, Diana Krall   This Dream of You Verve Records B.C./U.S.
This is a self-produced outing, combining tracks she worked on with her late mentor Tommy LiPuma in 2016-17. Musicians include some of her mainstays like John Clayton, Jeff Hamilton, Christian McBride and Russell Malone. But it might seem that she gets out of her comfort zone with accordion, and country fiddle in “Just You, Just Me.” Not so. She adapts well to these changes in arrangement. Her very dark version of “Don't Smoke in Bed” may seem out of character, but it really works. This is probably her best album in a while.
http://www.ververecords.com/music/diana-krall-dream-you

2. Laila Biali  Out of Dust  Chronograph Records / ACT Music Ontario
The Grammys categorized Out of Dust, as a pop/vocal album, but there are enough jazz elements here to qualify for this category, here. Biali has combined pop/gospel, R&B and jazz sounds on the various tracks. She shows off her vocal prowess on Greg Porter's “Take Me To The Alley” and her own “Revival” combines pop percussion with gospel keyboards/organ, along with an amazing reed section. She had a hand in composing ten of the eleven tracks on the album. This is her most adventurous outing to date.
https://www.actmusic.com/en/Artists/Laila-Biali/Out-of-Dust/Out-of-Dust-CD

3. Kurt Elling Secrets Are The Best Stories Edition Records U.S.
Elling could sing the dictionary and I would be enthralled. While it often appears that he is talking and not singing, somehow it works. He has a way of fitting his voice with the accompanying music that few can. He showcases his voice, on the first track, performing primarily with bass and background vocal backing. Later, he sings in Spanish and at other times briefly sings a capella. He may be unconventional, but is probably one of the best interpreters of song in the jazz idiom around.
https://editionrecords.com/releases/kurt-elling-secrets-are-the-best-stories/

4. Kandace Springs  The Woman Who Raised Me Blue Note; U.S.
Springs sings tunes made famous by the likes of Billy Holiday, Roberta Flack, Bonnie Raitt and others. There are plenty of guest artists such as Chris Potter on sax, Norah Jones on vocals, Avishai Cohen, trumpet, etc. Her voice soars to the height of Cohen's trumpet on “Pearls.” She,  shows her R&B chops on  “I Put a Spell On You” and does a cool call and response part with David Sanborn's sax. But, it's a slippery slope, when one covers the Billie Holiday classic “Strange Fruit.” This updated arrangement is less appealing to me, but you can't fault her voice or her take on the lyrics. Overall it is a very good album with some brave choices in song selection.
https://store.bluenote.com/products/kandace-springs-the-women-who-raised-me

5. Jenny Davis  Rearranged   Three Penny Records   U.S
Seattle's Davis has one of those voices that remind you that the voice is a musical instrument. She has composed all but three of the twelve tracks and has surrounded herself with very good musicians. including Brazilian pianist, Jovino Santos. This is an album that probably wouldn't have come to my attention in a “normal” year. I'm glad it did.
https://www.threepennyrecords.com/jenny-davis

Best personal campus/community radio moment or experience of the year :

Local musician Jeremy Kneeshaw released a new Christmas Album, called Got My Love to Keep Me Warm. I, then recalled that Lindsay May had put out her Christmas album, “Sweet Cinnamon,” last year. With this available I put a message in the Kamloops and Area Musicians Facebook page. I asked if any of them had Christmas/Seasonal songs in the works and if so, would they provide me with a digital copy to play on a show.

The response was very heartwarming. Some were in the process of doing this and a number actually recorded originals and cover tunes for use. Gerry Sherk of Yale County Jug Band put together a cool original, non-traditional tune called “Mary, Merry Christmas.” Gerry Makaro aka Gerry Mack Jacks, got on board, too. He showed his inventive streak by making percussion/chime sounds out of glasses of liquid and substituted bowing on a bass for a string section with his version of “Silent Night.” Ryan Noakes of the a capella band Slow No Tempo, put a couple of tracks together as a solo performer, doing all the voices and sounds himself! He also provided me with other music from Slow No Tempo. Their first Quarantet Christmas track, “O Come All Ye Faithful/Adeste Fideles”.was recorded in isolation using only their smart phones. More music was provided by Sheila Soares, David and Ronda Olds, Anita Eccleston and others. With this I got my first ever all Kamloops Musicians Christmas Show. It aired Dec 9 and twice on Christmas Day.