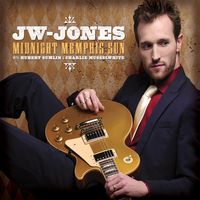 After listening to JW Jones album Midnight Memphis Sun it is not surprising why he is touted as ‘Canada’s Top Touring Blues Act. Earning well deserved accolades from Guitar World Magazine in 2009 that put Jones alongside guitar legends like B.B. King, Jimmy Page, Jeff Beck, Carlos Santana and others it is no wonder why he has achieved success like is a seasoned veteran at an age when many artists are just getting started.
Hollywood Celebrity and huge Jones fan, Dan Aykroyd said, “this is an amazing blues band, and I’ve played with the best!” Mr. Aykroyd wrote the liner notes for the 2008 release “Bluelisted”.
Midnight Memphis Sun is his sixth release – his debut came out while the Ottawa-based musician was only 18years old.
For this album Jones was able to add Charlie Musselwhite, contributing his bluesy harmonica to three tracks and Huber Sumlin, (a stupendous guitartist for Howlin’ Wolf) also appears on three tunes. The recording took place at the legendary Sun Studios in Memphis, who many refer to the studio is where it all started. Sun Studios was the home to the earliest recordings of Elvis, Jerry Lee Lewis and Johnny Cash.
Jones has always shown astounding musical maturity that began with his debut album. Since then he has progressed with arrangements, more complexity and music to satisfy the fussiest of musical critics with each release. Time spent on each musical project shows that he is making each and every note counts throughout all of his productions.
The majority of the tracks run with the same theme of love gone wrong, so I guess why it is referred to as the blues. Performing covers Lowell Fulson’s “Love Grows Cold,” Jimmy Reed’s “I Don’t Go For That,” and a surprisingly awesome version on Bryan Adam’s “Cuts Like A Knife,” which is a rock and roll number, but all packaged together with remarkable poise and the character of blues.
Jones is an excellent singer but pales in comparison to his abilities on the guitar. In future endeavours it might be a thought to mix it up a bit with other vocalists, since JW has the ability to attract big name performers for his albums. However, this album is top notch with spectacular songs, well thought out arrangements and superlative performances.