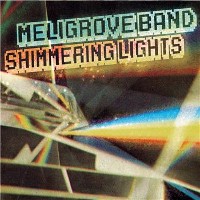 The Meligrove Band is an indie-rock quartet from Toronto, Ontario. For almost a decade, they have been shaping the local scene with their mix of upbeat dance rhythms and experimental melodies. Shortly after the release of their critically acclaimed 2005 album Planets Conspire, their label V2 Records went bankrupt and caused the band’s momentum with touring and recording to slow down significantly. Several years later, Shimmering Lights is the product of a slow do-it-yourself approach which was created without the pressure of record label timetables. The new album was recorded mostly in their homes, and enabled a process of songwriting with gaps for touring and revisions in recording.

Shimmering Lights was mixed and produced with assistance from Jose Contreras, who also worked on their previous release Planets Conspire. There is also a plethora of guest musicians, including violin from Randy Lee (known for playing with several indie-pop artists, such as Allie Hughes) on four of the album’s tracks. The song “Ghosts At My Back” is an excellent introduction to Shimmering Lights, with duelling trumpet features from Brendan Howlett and Andrew Scott. The second track is “Really Want It”, which characterizes The Meligrove Band sound with its jagged upstroke guitar, melodic sliding bass lines, and shouting vocal hooks of prior releases.

There are also a few elements of Shimmering Lights which seem to mark an extension of the band’s distinctive style. The song “White Like Lies” is driven by dissonant piano parts, as well as noisy cymbal crashes and spastic hi-hat fills. “Halflight”, the album’s first single, has multiple melody changes which add a baroque-pop feel, before concluding with a whistling ending (reminiscent of Planets Conspire). The next track, “Kingfisher”, includes groovy drum samples from Yoroku Saki and a full-on screaming chorus section. “Bones Attack!!” is also a standout song with its use of group choir parts, falsetto harmonies, and vibraphone from indie-rock multi-instrumentalist Rich Aucoin. Shimmering Lights manages to experiment with new structures and tones, without departing too much from the sound that has popularized The Meligrove Band. While some fans of the band may be disappointed with the lack of dynamic diversity of past albums, Shimmering Lights is a fun and danceable release which may open doors to new directions in the future.