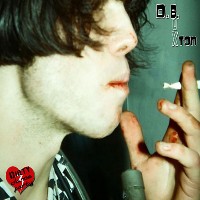 Daniel Benjamin Buxton, also known as D.B. Buxton,is an emerging force in the Canadian music scene. After leaving home at age fourteen, Buxton became a well-known street performer in Edmonton. In recent years he has worked with a few different bands and collaborative projects, including an indie-rock/soul project known as The D.B. Buxton Revue. Although they are now defunct, their song “Sex With My Ex” received notoriety in 2008 after being remixed by Cadence Weapon. The remixed track was featured on Cadence Weapon’s mix-tape Separation Anxiety, but has also been re-released on Dirty Dance Party as an awesome closer.

Dirty Dance Party is the first solo effort from D.B. Buxton, which combines his urban-pop style of song-writing with electro-funk elements. The album’s instrumental base is exceptionally groovy and danceable; there is a plethora of diverse clashing guitar and synthesizer melodies filled out with thick electronic bass-lines. However, the vocals are definitely of primary attention. Buxton merges classic soul and funk singing with experimental-punk shouting, and even moments of overt rapping. The lyricism is extremely sexually explicit, almost bordering on parody in its use of humour and irony.
Overall, Dirty Dance Party is a very fun and entertaining album. Hip-hop and rap enthusiasts will be pleased with the astounding feature verses from Corvid Lorax, as well as Cadence Weapon who performs a hilariously post-modern conversational duet entitled “All My Girls”.  Other stand out songs includes the introductory “Waste Some Time” and the back-to-back “My Package” and “Your Package”. D.B. Buxton is a captivating character who is only beginning to break out as a producer, and as a songwriter in Vancouver indie-rock group The Orpheans. For fans of Chromeo or Of Montreal, Dirty Dance Party is an impressive and original debut.