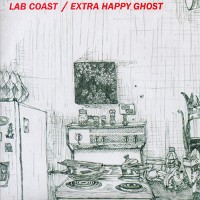 It's kind of hard to imagine anybody still making music in the lo-fi genre with all this cheap recording equipment around nowadays, but some still find a way to make their grainy pop hits even grainier.
Take for instance Lab Coast and Extra Happy Ghost, two Calgary bands who currently have a split 7” out on Saved By Vinyl. Channeling the sunny pop of The Beach Boys with the sunny indie-rock of Stockton, California's Stephen Malkmus, both bands offer psychedelic rock that sounds like it was recorded in their parents' basement.
Lab Coast's“For Now” has a plunky toy piano rocking out a melody over distorted guitars and homemade percussion, while “82 Will I Be You” sticks to a straight-ahead indie-rock formula.
Extra Happy Ghost (solo project of Matthew Swann) uses the same formula of fellow Calgary rockers Lab Coast, but with more brooding tones and a more expansive soundscape. “1990's Brain Damage” sounds like it could have been stolen from an Elliot Smith demo compilation, while “Mechanical Ill”'s Casio keyboard sounds and cheap drum patterns are reminiscent of the industrial electronic of Tangerine Dream with Jon McKiel's vocals.

At a mere ten minutes long, it's definitely a short effort by both bands, but hopefully a sign of better full-length releases in the future.