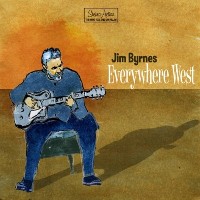 Juno Award winning Jim Byrnes has put out one of the bluesiest albums north of the Mississippi with the recent release of Everywhere West. This is the fourth collaboration with musician/producer Steve Dawson, the President of Black Hen Music. Putting these two together creates a gifted musically magical matchup dishing up the blues for the most discerning palate. From the drop of the needle on the first track, “Hot as a Pistol,” which certainly lives up to the song title with blues riff riveting licks, Joe Cocker vocal haunts and Byrnes stroking the guitar producing an enviable blues and roots blend.
Everywhere West was recorded live with barely any overdubs and features Jim’s band that has been following him around over the past six years: Steve Dawson on guitars, Keith Lowe on bass, and Geoff Hicks on drums. Rattling the ivories like so few can is Chris Gestrin on keyboards, Keith Bennett on harmonica, Jeanne Tolmie on backing vocals and the Daniel Lapp on fiddle and trumpet.
One of the most memorable tracks off the album is the rendition of Bobby “Blue” Bland’s “Yield Not to Temptation.” Dawson really delivers strong strokes on the banjo on this most memorable gospel track. Jeanne Tolmie and Byrnes blend handsomely throughout the song that lends itself to the best song revival ever.
Self admittedly Byrnes dedicated Everywhere West to “all those who have gone before” and there are historical hints littered throughout the entire twelve song collection. Whether he’s reaching into the very being of his soul to deliver a Byrnes original “Storm Warning” or reaching into his pocket of musical magic on his version of Jimmy Reed’s “Take Out Some Insurance on Me,” Byrnes is releasing the pain of the blues and handing it, on a silver platter, to the listener giving them the opportunity to feel it as well.
This album has prompted me to dig into the rest of his musical library, if they are anything remotely close to this album, my blues collection will be complete. Byrnes is phenomenal at making you feel the blues with every note, go grab Everywhere West for the best musical magic of Canadian Blues.