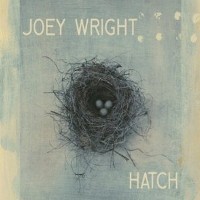 When you mix bluegrass, blues, swing, pop and country along with some good ol’ strumming on the mandolin you get Hatch by Joey Wright.
This third musical venture is a bit different for Wright since this is the first time taking over the vocal job. His voice definately has that homegrown feel giving the listener that warm and fuzzy feeling all over.
The instrumentals throughout the album are tightly arranged to maximize the sound of guitars while the strings that appear in some of the songs are all very delicately and elegantly woven in.
For a few of the tracks Wright goes instrumental, and those songs are as strong as any of the vocal numbers. One particular instrumental track “Strollin” definitely stands out for me above the rest with the flow of a very warm tropical breeze.
The songs, for the most part, are short and concise pieces of musical work. Thus material does not become repetitive or stale for the avid listener.
A heavy-duty cast of notable musicians including Evan Cranley and Pat McGee (Stars), John Showman, Joe Phillips, Sarah Harmer and Dan Whiteley add a delectable flavour to many tracks.
Harmer guests on the standout "Sunrise," while Millan and Jenny Whiteley team up to add depth to "The Scar" and "Expectations are the Killer." Instead of the bluegrass that has been a big part of Wright's musical journey, there is a dreamy, psychedelic folk vibe speaks quite softly on all tracks.
If you are seeking pleasant vocals, laid-back melodies and appealing instruments that blend together flawlessly, add Joey Wright’s calming album Hatch to your collection.