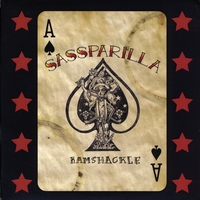 Sassparilla make what I would call ‘foot stompin’ music’. By that I mean , from the beginning of Ramshackle right to the end of it, I bounced my knee, tapped my toes and stomped my feet along with the music. Picking up the best parts of folk, bluegrass, blues and country & western, mixed with a healthy dose of the writing styles of misters Cave and Waits, Sassparilla put a lot of work into their songs. They’ve even thrown in a little bit of swing-style jazz into the mix. I know, this makes it sound complicated, but it’s not. The songs are fun, sparse (a washtub bass for cryin’ out loud!!!), and really dark all at the same time. I imagine that the members of Sassparilla wrote the songs for Ramshackle with a live performance in mind and, unlike most bands, they’ve captured the spirit of a live show in the studio. Listening to this album you can imagine seeing the band crammed onto a stage in a seedy dive surrounded by folks ‘in the know’ who are singing along, stomping their feet and dancing up a storm.

Lead off track ‘Devil’ sets the tone perfectly for Ramshackle. It’s upbeat (as in there is a great beat), danceable and you can easily sing along to it. It’s not a folk song, it’s not a country song nor is it a blues song but...that’s what makes Sassparilla so great. You can’t pin them down to a genre easily and while you’re trying to pin them down, you realize that you’ve been dancing and singing along and smiling. Even though most of the subject matter is dark, they still make you smile. ‘Fire Sale’ moves into more of the Tom Waits territory while ‘Love Song’ takes on a little bit more of rootsy swing and a wonderful duet between male and female vocals. Ramshackle is a fantastic and fun record that I know is going to be in our disc player and on playlists for a long time!