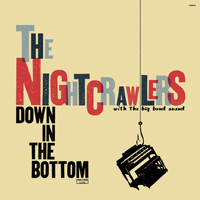 Down In The Bottom
Cellar Live ( http://cellarlive.com/ )

Jimmy Smith with his Hammond B3 organ was one of the earliest proponents of the soul jazz sound. When keyboard technology caught up to him and maybe even surpassed his instrument he still stuck with it and thankfully a quintet out of Vancouver called the Night Crawlers has, too. Keyboard player Chris Gestrin fills in the Jimmy Smith role admirably, but this CD is really a group effort. Many of the players on Down in the Bottom are fixtures at The Cellar in Vancouver (alto player Weeds owns it) and this extends to the added big band which appears on six of the eleven tracks.  While the playing is spectacular, the arranging may even be better. I don’t think I’ve heard a better arrangement of “Moonlight in Vermont” than the one that appears here. It is arranged by Gestrin. Drummer/leader Jesse Cahill’s brushes and Gestrin’s organ usher in this classic arrangement and trumpeter Chris Davis blows a solo for the ages. Other than this track this blues laced offering rarely slows down and every instrument in use seems to be featured at one time or another. Some of the many highlights are Chad Makela’s blazing, baritone on “Going Down,” Brad Turner’s trumpet and Steve Kaldestad’s tenor on “Modal Issue” and Cory Weeds’ soulful alto on the Dr. Lonnie Smith composition “Love Bowl.” While not primarily featured, yet very noticeable, leader Jesse Cahill can really play drums and at times he brought the big band drumming of the great Buddy Rich to mind.

It can be risky to add a big band to an already established project. On some projects the results sometimes sound like two different bands playing at the same time with different purposes in mind. Not here. The combination of the great arrangements by Gestrin, Turner and Bill Coon, along with the fact that these musicians have all played together at one time or another makes for a seamless addition to the Night Crawlers.

The Cellar Live label has a history of releasing great Hammond B3 organ fronted releases such as Crash with Dr. Lonnie Brooks and the previous Night Crawlers CD. I am happy to report that with the second Night Crawlers release, Down in the Bottom, the tradition continues, and in this case they have truly, hit the ball out of the park.