More By Mark Berube And The Patriotic Few 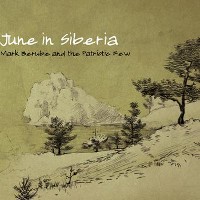 Mark Berube And The Patriotic Few ( )

With an inviting album cover that beckons you to laze out on the banks for a picnic, added by the front to back tracks of June in Siberia would make for an engaging day on the waterfront. Montreal songsters Mark Berube and the Patriotic Few, undoubtedly one of the longer band names in Canada, embark with a potential riveting full length follow up to 2008s What The Boat Gave The River CD. Recorded live off the floor at Montreal’s Hotel 2 Tango, June In Siberia is a gentle, intoxicatingly different blend of music.

The orchestral folk and jazz with notable arrangements depicting the fullness of the sound jammed packed with piano, cello, upright bass, drums and vocals with songs that are intricately woven throughout the album.
Mark Berube is certainly one of Canada's most particular talents and certainly one of its best kept secrets (for some ridiculous, nonsensical reason)... the album is a stunning, stirring piece of music that is certain to be discussed in many a prize nomination circles.
The beginning track, fittingly titled “Hello” is a great introduction that treats the listener to a fine wine as it slowly and carefully ushers in the various instruments you’ll hear throughout, including Berube’s great voice. As he begins to repeat “hello” at the end of the song you’ll be singing along.
“Side of the Road” is the first song that features guest vocalist, Dan Mangan, who was a perfect fit that almost sounds like a song Mangan would have written himself. ‘Side of the Road’ is littered with interesting lyrics with melancholy stories about waitresses.
Emily Loizeau is featured on the next track “Above the Ground” and Berube makes great vocal harmonies with the French songstress. Also of note in this song is the great use of minimalist percussion.
“Let Me Go” and “Hurricane” are also worth mentioning for its absolutely frantic pacing and stellar sense of poetry.
The rest of the songs are all a treat to listen to. This is a great example of a small orchestra doing what it does best. Sip the wine slowly as you won’t want to miss the taste as you listen to the album that is rounded out perfectly by Berube’s elegant piano and drifting voice.