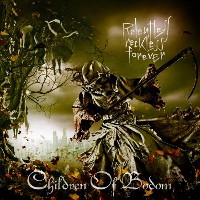 Admittedly, I've never been a huge Children of Bodom fan. I think the reason for this was that I came a little late to the dance and had been reading all the hype surrounding Alexi Laiho and company long before I'd heard the band, so I missed out on the classic Children of Bodom records and really only started with Are You Dead Yet. Having heard Relentless, Reckless Forever several times in preparation for this review, I've decided I need to forget I ever heard the previous 3 albums and go back to the beginning to check the band out. THIS is the band worthy of all the hype I had been reading for years. Relentless, Reckless Forever is more than just a mashing of Alexi Laiho riffs and solos, the songs are solid and consistently good. I have a feeling that too much guitar praise may have affected the previous albums as the flat-out wankery is gone and the song is the focus again. This also marks a big return for keyboards in the band. Keyboardist Janne Warman has always been an integral part of Children of Bodom but he's been a lot quieter musically in the last few albums. Here he bursts back to the forefront, really shining on tracks like: ‘Shovel Knockout' and 'Relentless, Reckless Forever'. Not to be out done, of course, Laiho brings out some amazing guitar work, check out the solo on 'Pussyfoot Miss Suicide'. Laiho's vocals also sound solid on this album, just as evil and painfully screamed as on previous records but clearer and with even more of a sense of melody to them.
Whether it was a case of songwriting partners working together again, a band not listening to their own hype or the right combination of booze and saunas (they ARE Finnish after all), Children of Bodom have created the most solid, entertaining piece of work I've heard from them in the last six years. If you were a fan of Bodom from the early days I think you'll really dig this record. If you are a newer fan, Relentless, Reckless Forever will blow you away.