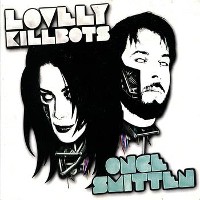 Lovely Killbots are a keyboard and drum duo based in Toronto, ON. Their style is self-described as “robo-electro-indie-dance-rock”, which is about as accurate as possible. Once Smitten is their second full-length album, and was produced by Gavin Brown (known for his work with Billy Talent and Metric) and Dave Mohacsi. The band is fronted by Lauralee Sheehan, who plays keyboards along with lead vocals, with Ryan Beattie covering drums and backing vocals. Despite the seemingly simple setup, the thick analog synthesizers and complex drumming (combined with stellar production) amounts to a very full sound.

The first song , “Must Be Machine” starts the album with suspenseful yet danceable drumming, and eerie chanting vocals.  The next few tracks of Once Smitten move through  some of the band’s simpler and more structured moments, but includes memorable melodies and powerful drumming (as in their single “Time For Change”). The album shifts slightly with “On My Pillow”, an upbeat and groovy electro-pop song with fast drum fills. The second half of Once Smitten has increasingly technical rhythms and more quirky creative vocals. The band is sometimes reminiscent of Metric or You Say Party! but may also catch comparisons to Death From Above 1979 or Radiohead. Tracks such as “Performance Enhancing Hugs” and “Big Beat” feature polyrhythmic patterns layered with strong singing and catchy keyboard hooks. “Romangst” even implements a progressive use of time signatures, and almost feels like an experimental post-punk song. Overall, Lovely Killbots show innovation within the electro-rock genre and a lot of depth as a duo.