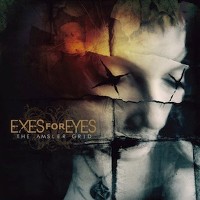 The Amsler Grid
Year Of The Sun ( )

Sometimes you hear about an album in advance and assume you know what it’s going to sound like, but the best albums (usually) are the ones that surprise you. When I first heard about this project, I expected a great thrash record as I only knew Dave Sheldon as the bass player for Annihilator. That was of course, until I heard that Big James Arsenian of Endast would be doing vocals. Having known Big James for years through Endast, I was pretty excited to hear what this would bring. Exes For Eyes definitely are not a thrash band, and in fact sound closer to Endast than Annihilator but it’s not quite right to call the band anything other than groove metal. Yes, there are some breakdowns, and some melodic vocals (mostly from Dave Sheldon who has an incredible voice, my favourite exampel is the back and forth between Sheldon and a clean singing Arsenian on ‘Romanticize The Struggle’) but it’s all about the groove with Exes For Eyes. The Amsler Grid feels like an album that was written specifically to please the musicians and not to follow any trends or fit into any category. If you check out other reviews, you’ll see that no one can seem to agree on what type of music Exes For Eyes is and that’s a great thing. It’s nice when you can’t pigeonhole a band, and they are still really good. The Amsler Grid is full of terrific guitar riffs and solid song writing. While Endast is more about anger and aggression, Aresenian has brought a little more of his other emotions to the surface in Exes For Eyes, and perhaps wears his heart on his (short) sleeve a little more here. Vocally, Sheldon’s clean voice works well with Arsenian’s yell and growl vocals and musically, Sheldon has obviously studied what works and what doesn’t when it comes to writing a solid, memorable metal song.

All in all, The Amsler Grid is an excellent record and definitely a stellar entry into the realm of Canadian metal. Since the reception to the music has been so positive, the studio band has become a live band, and they’ll be doing a tour out west very soon. Make sure to catch them when they come to your town and pick up the album in the process. Exes For Eyes are definitely a project to keep an, erm, eye on!