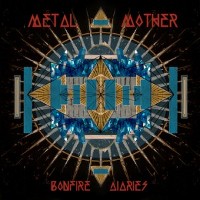 Here is an album that teaches me to pay more attention to what I am agreeing to review. About two minutes in to Metal Mother's Bonfire Diaries album I realized that I must have read a different album’s description and attributed it to this one. Don't get me wrong, this is a highly enjoyable album but the mellow, experimental pop of Metal Mother is a little outside my usual realm of listening. Bonfire Diaries is built on layer upon layer of keyboards, electronics and swirly instrumentation over some interesting beats. The track ‘Vices’ really lets the percussion shine however the real treat on this album is singer Tara Tati’s (aka Metal Mother) voice. She uses her soprano to weave in between the instruments, coming up with a particularly witchy sound in ‘Shake’ while letting it flit like a ghost here and there in other songs. ‘Lost Story’ in particular uses Tati’s voice to its fullest, while the afropop melody of ‘Billy Cruz’ makes for maybe the most accessible and lovely (yes, I used the word lovely) song on the album. If you are a fan of shoegaze, reverb filled pop, or even mellow trip hop-esque material, this album is going to be right up your alley. I could tick off several artists that this reminds me of in parts but the entire album mimics no one and Tara Tati seems to channel her musical influences into something uniquely her own.

While Metal Mother is assuredly not metal, her approach to song craft isn’t straight ahead pop either. This album was a pleasant surprise for me and will definitely be in the collection to be pulled out at more mellow times.