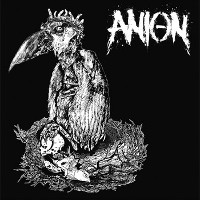 First off, Anion get a big thumbs up for putting Carrion King out as a 7" vinyl record. The artwork is terrific and the stark black and white suits the music to a 't'. Then there's the music itself: loud, chaotic and chock full of anger. The immediate and obvious comparison will be to bands on the Amphetemine/Reptile label from the 90's, which definitely isn't unfair. Anion creates music first and foremost for themselves, not for anyone else, not for trends and certainly not to get rich (their entire discography is free to download from their bandcamp page). This kind of freedom allows the band to be ugly in its own way, slightly angular guitar riffs, Johnny Matter spewing bile over top...It's intense, it's memorable, at times completely catchy, and then it's over. Keeping to the hardcore vein of things, Carrion King is 4 songs long and just over 16 minutes, which really just isn’t enough, it leaves you wanting more. In a time when bands seem to go on ad naseum though, this is a good thing. I’d rather a band left me hungry for more than full of crap and bored. Anion seems to agree with me!

Whether you are in to traditional hardcore, or the more experimental noisecore, or perhaps something that is just going to scare the crap out of your folks because it’s so damn angry, Anion is a band to keep an eye on. More music is definitely available from them, and the growth from their first Corpseflower demos to Carrion King is obvious, though just in songwriting. These guys are serious about making dirty, sludgy, imperfect hardcore, that will help you get those frustrations out. Pick this up now, the band is on tour and could use the dough!