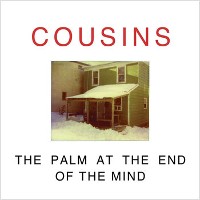 The Palm At The End Of The Mind
Saved By Vinyl ( http://www.savedbyvinyl.com/ )

I've always been big on palm trees. Something about them always made me feel COOL. They give off summer vibes and fun times, in my opinion. COUSINS, and they aren't my cousins as of yet have just released their sophomore record, The Palm At The End Of The Mind. As I drive home for Easter weekend on the 401, I find myself sitting in a mix of cars waiting for the bottleneck of traffic to finally bust open and give way to that 120km/hr steady stream of cars. While I'm sitting and waiting for the abundance of pollution to part ways, I can't stop picturing Leigh, Pat (COUSINS) and myself driving real slow down Venice Beach in a 1959 Cadillac convertible listening to their most recent LP. Pretty ass cheesy but that's the feeling I get once "Jules" (lead track) starts to play. The surfboards are in the back ready to go and the girls are in their 1960s high cut bathing suits dancing on the beach to music that's playing from their battery operated radios.
COUSINS are a very upbeat, fun, quality garage rock band from Halifax, NS that know how to lay out an album and communicate certain feelings through their music. This being only their 2nd full-length record, the guys have a good understanding of their sound and how to tempo their songs. From the get go, "Jules" leaves you in a good upbeat mood and kind of wanting to go surfing. And then "Baby" arrives and flips the script. A very laid back, chill song that's led by a heavy kick drum and a girl that has her own thing going on….I know a few of those. The boys have been working up to this album as they released "Khyber" as a single in early 2011 and "Secret Weapon" & "Speech" in mid-2011 as a two track EP. With such progression into an album, you can really tell how polished these songs feel as each song cue is hit with a punchy drum and a faded out guitar which gives the record a heavy echoing of poetic power. Once I finished listening to The Palm At The End Of The Mind, I wasn't to sure what to think or how approach the review. But I had a feeling that COUSINS were giving us a little glimpse of life out on the east coast courtesy of a palm reader.
My Suggestion: This album is best heard on a pair of headphones. Or with your buddies/girlies sitting around socializing throwing back a few pops.