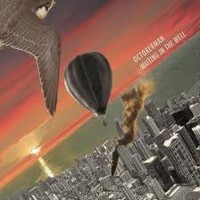 Waiting In The Well
Saved By Vinyl ( http://www.savedbyvinyl.com/ )

In the past, Octoberman has released great records. While Waiting in the Well is no exception, there are a few surprises on this fourth album by Marc Morrissette.
Upon first listen, fans may be disappointed by an apparent lack of stand out tracks; but over time “Pool Hoppin'” and “ Dressed Up” slowly began to pop like so many Magic Eye posters. The melodies, rhythms, and instrumentation will be familiar to Octoberman's fans; the synthesizers on “Dressed Up” will not.
The Lyric in “Burning Sun” (Now your beauty has come undone) feels too simple. Notwithstanding the cliché, the overuse of the phrase in popular music has robbed it of meaning. Its use by Marc Morrissette hurts a little – well, more than just a little – since his track record confirms that he's definitely capable of more meaningful lyrical expression.
The discordant guitar licks on “Waiting for Christine” and “Actress” are a welcome departure from the simple chord progressions found in most folk-rock albums. Adding to the atmosphere is the new addition of some light synth in “Dressed up.” This experimentation represents a new angle on Octoberman's classic sounds, which until now has largely been standard guitar-bass-drums with some background horns rounding out the instrumentals. The light touch of horns remains and the experimentation with some novel sounds is a nice addition, and demonstrates some development. He approaches the synthesizer as a background element; here's hoping he continues to develop and explore new sounds on future efforts.
Fans of Octoberman's past albums and EPs will be pleased with the latest offering from Marc Morrissette. Even though the album is less punchy and attention grabbing than his last few recordings it is still a strong melodic folk narrative.