All The Things We've Been Told 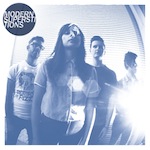 Toronto pop-rockers Modern Superstitions bring the noise on their full-length debut. Produced by Ben Cook (Fucked Up) and Brian Borcherdt (Holy Fuck), the self-titled album offers ten self-assured tracks and one stellar set of pipes—which may come as no surprise to fans of the band’s 2010 EP, All The Things We’ve Been Told. Once again, singer Nyssa Rosaleen rises to the occasion with her versatile vocals, seamlessly alternating between soft sentiments and fiery howls. However, this time the band drops the “oohs” and “aahs” and opts for an edgier garage-rock sound, crafting a seriously confident release.

High-energy opener “Last Night’s Dress” introduces the album’s rebellious temperament, conveying a restlessness that permeates the record. From the commanding crescendos on “School Days” to the shout-it-from-the-rooftop proclamations on “I’m A Coward” (“I’m a coward/But I wanna be brave for you”), the album expresses both conviction and vulnerability without losing steam. Propelling forward with a youthful vigor, Modern Superstitions come into their own on their self-titled debut—a sentiment perhaps best captured on “Bandits”: “Sleepless nights/Dreamin’ days/We’re a class of our own.”