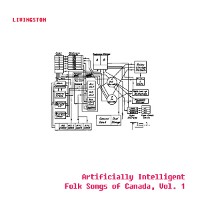 I considered writing this entire review in fake computer code if only to hint at the wonderful absurdity of Henry Adam Svec’s latest project Livingston: Artificially Intelligent Folk Songs Vol I. A doctorate holding folklorist, media theorist, and performance artist, Henry Adam Svec is a man of diverging and colliding talents. Currently an instructor at Western University he first drew my attention with The CFL Sessions. Ostensibly a collection of recordings culled by Canadian folklorist Staunton R Livingston from the archives of the Canadian Football League featuring the folk song musings of former sports stars. Previous to this Svec toured the country declaring himself the Boy From ET all grown up and converted to the life of a travelling musician. Since these clever, if spurious, recordings he has gathered Canada’s indie music royalty to perform the purported Folk Songs of Canada NOW. And to make a good thing better he often makes his work available free online with ample and entertaining supplementary content.

This is certainly the case with Livingston, which comes with an involved backstory. As it is told, Livingston is an artificially intelligent database named for Svec’s favoured and famed folklorist Staunton R. Livingston. After years of work the database has been fed the totality of the history of Canadian folk music. Now, this digital organism is composing. Under the watchful eye of musician turned inventor Henry Adam Svec and Czech programmer Mirek Plíhal Livingston is writing new folk music for the Canadian canon. In what Svec has hinted may become a trilogy, the first volume, Artificially Intelligent Folk Songs Vol I, represents the future of folk music. Since the database can only craft the canon and not perform it Svec has put together a band to make the songs a musical reality.

With all this backstory, drama, and design, the music almost seems like a side note. Yet the songs on the album are charming, off-hand, and strangely intimate. Full of references to Canadian folk music (and in one case American rock) the seven-song release is simply an enjoyable listen. And while the story of Livingston may come with a sly wink like all of Svec’s projects it is just real enough to inspire a strange sort of hope.

You can stream Livingston and read the full story of its creation at www.folksingularity.com