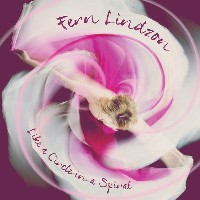 Elizabeth Barrett Browning said, in her letters to R.H. Horne in 1839, "the luck of the third adventure is proverbial'.

Juno Award-nominated singer and pianist Fern Lindzon's third recording Like a Circle in a Spiral is indeed an adventure in song.  She reimagines classics and makes her original songs seem timeless.

In this recording Fern personifies a woman who lives confidently with her own instincts and artistry.  She has taken 11 songs that span distance and time and made them personal with her vocal and musical arrangements.  There are moments where she is smart and smouldering, sublimely elegant, and flowing in her interpretations.  In addition to some originals, the album includes an eclectic grouping of the work of Michel Legrand, Mary Lou Williams, Cole Porter, Yiddish ballads, and a contemporary Israeli song sung in Hebrew.

The framework of the album rests on Lindzon but she has some wonderful accompniment with Michael Davidson on vibes, David French on sax, George Koller on bass, and Nick Fraser on drums.  Flutist Bill McBirnie is like icing on the cake on two of the tracks.

Lindzon sets the stage for the album with the Ron Sexsmith tune "Jazz at the Bookstore".  The song lightly admonishes our habit of listening with half an ear in urban settings, but Ferm makes it tres cool.

I haven't thought about the song "The Windmills of Your Mind" in years, or "Night and Day" for that matter. Both are wonderfully renewed and inventive in Lindzon's hands.

You'll hear French or Spanish on many recordings but on Like a Circle in a Spiral you'll hear Hebrew and Yiddish, which really makes ths album interesting to listen to.  Language is a beautiful thing especially when it's underpinned by music.

Fern Lindzon has really raised the bar with this album, and who knows, maybe third time will be the charm.