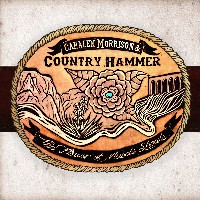 Cahalen Morrison trods well-worn soil in his latest release The Flower of Muscle Shoals. With this album the New Mexico raised, Seattle-based, country crooner continues his nostalgic journey through American country music as established in his earlier work. The album follows up a celebrated collaboration with Eli West with whom he created a highly listenable romp through classic Americana, called I’ll Swing My Hammer With Both My Hands. But for this record Cahalen saddles up his band Country Hammer for a more country swing sound. Throughout The Flower of Muscle Shoals Cahalen borrows on the country records of his youth wearing his influences proudly on his sleeve.

The album makes the rounds to the most tried and true themes of country music. There’s plenty of troubled love (“Through Your Window”), full out heartbreak (“Over and over and over again”, “I’ve won every battle, but I’ve Lost Every War”, “Sorrow Lines the Highway of Regret”, “Hobbled and Grazing”), and beloved hometowns (“Cascabel Valley”, “The Delta Divine”). A respite from the melancholy comes with the cheerful instrumentation and a song penned for Cahalen’s new bride (“The Flower of Muscle Shoals”).

While the record offers little in the way of surprises the vocals are warm and the trails comfortably familiar. The Flower of Muscle Shoals will lend itself well to smoky Seattle barrooms and country drives. Once you find yourself hocked go back and try the hard stuff: Hank, Waylon, and Marty.