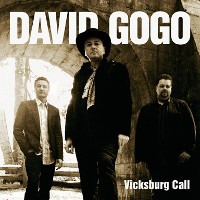 Vicksburg Call is David Gogo's 14th studio album and all indications are that it could be his most successful to date. It has only been out since Sept.4, 2015, but it already has been nominated for 3 Maple Blues Awards. Dave has stated that he sees it as his best work yet. Dave also acknowledges that his playing is not exactly "traditional" blues; I would say his style owes more to Johnny Winter's blues rock than to B.B. King (though he has opened for both of them numerous times). There are a good mix of tunes on this CD, mostly originals penned by Dave but also covers of tunes by Neil Young, Steven Stills, and an (unexpected) Annie Lennox, as well as one from another Nanaimo artist, Victor Anthony.
The band is tight, the recording is first rate and David Gogo plays with his usual bravado. A satisfying listen for any Blues fan.