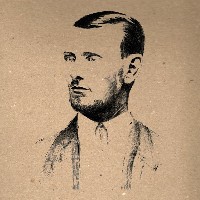 Ever wary of sequels, Snake River’s newest, Songs from an Adjacent Room, is a sensitive and artful telling of a prequel to their 2014 album. The Regina-based band, a side project of Christopher Sleightholm, have recently gained ground with a series of progressive jangly alt-country shoegaze releases. Sleightholm seems to have set aside other successes, including The Lonesome Weekends and Zerben, to focus on this promising premise of a would-be small-town socialite author.

The stage is set in February of 1989, around one household in a town called, Snake River Mountain. The earlier of the two albums, McKruski, busied itself with fragments from the night of February 23, 1989. This one looks back a few weeks further to streams of thought between adjacent bedrooms surrounding February 2. Here we listen to Reginald McKruski and his wife of 16 years, Jeanie McFeven-McKruski, discuss, reminisce, and log their words and thoughts. Embedded in these lyrics, there is love, there is loss; desire and darkness; intrigue and wickedness; spiteful romance and youthful affection. There’s the mundane tedium of every relationship that ever was.

Vocals buried deep in guitar reverb, the music of Snake River comes from a place long before 1989. Reflecting the cover art, the album forms imagery of cracked and faded photographs containing forgotten memories of a dusty ranch. There is a steadfast drawl in the vocal delivery that comes from worn phonographs. A twangy almost in-tune guitar builds to A Northern Chorus-swirl of melody. A jangly take on Sianspheric comes comparably complete with all the escalating pomp and shimmer. These are the type of classic songs that would be played on the stage of the Twin Peaks Roadhouse most nights of the week, everyone singing along. The mood is blatantly optimistic, yet subtle tension mounts in dissonant noise through multiple effect pedals. At different moments throughout the album, the tempered force is crushing.

Both musically and lyrically, Songs from an Adjacent Room is a feat, seeing especially that its narrative is so flexible. Is this story one tragic couple’s demise or a telling of triumphant spousal reconciliation? As it contains both, a listener’s interpretation of any recent Snake River release will likely depend on whether they hear the music after grey, dark, or sunny skies.