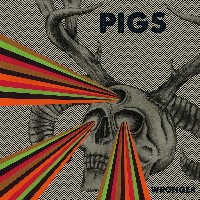 There are a number of aggressive musical acts who refer to our friendly fauna with their names: Pelican, Swans, Horse the Band, and Mastodon to name a few. The cutest of the lot, Kittens, developed a noisy sound that shifted from no wave and hardcore to cowpunk and alt-country. It’s this distinction that can most clearly trace a line to the experimental noise rock of Pigs. Pigs is made up of noise rock veterans in their own rights, Dave Curran (Unsane), Jim Paradise (Go!, Hell No), and Andrew Schneider (Slughog). While it may not seem entirely fair to put those two acts in a line, since, the simple animal name only begins where that parallel can be made.

The music contained on Pigs second full length album, Wronger, sounds like Unsane, but contains an experimental edge not unlike something Kittens would think up. For instance, the opening track, “A Great Light,” two guitars simultaneously repeat a two and three note dissonance while two drum strikes slowly complete a slightly out of sync loop eventually completing the loop back into syncronization. This sets the tone for an interesting heavy and dark album. Later on, however, the mood is lightened with “Mouth Dump,” which contains a sarcastic banjo lick underscoring an unnamed interviewee’s response about the problem with being educated and being led by the educated. Beyond these is a dynamic album of primarily noise rock, emphasizing the noise greater than any of the members’ bands did previously. Despite this slightly more chaotic accent, Wronger also comes across like stripped down versions their previous bands. The songs usually squeeze in under three minutes, but at the same time they are comfortable stretching them out to lengths exceeding six. All this is to show how this Pigs release could be understood as Unsane doing an impression of Kittens, which to any fan of either will be an excellent thing.