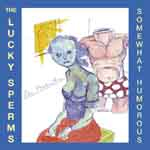 The Lucky Sperms are Jad Fair, Daniel Johnston, and Chris Bultman. It comes as no surprise that Fair and Johnston are kindred spirits, both musically and probably otherwise, and Bultman fits right in (although he doesn't seem to own an Incredible Hulk t-shirt like Fair and Johnston, but certainly looks like the indie rock kid brother of the two), penning the same sort of unavoidably strange, yet endearingly intoxicating tunes for which his partners are renowned.

Fair's "Yellow Buttons" is a stand-out, with a menacing undertone which should probably make us all very worried. The trio even try a couple of covers of songs you probably thought you never wanted to hear again (The Beatles' "Michelle" and The Rolling Stones' "Ruby Tuesday") and manage to revive them with skewed vigour, especially with Johnston's warbling rendition of "Ruby Tuesday." Weirdly wonderful in exactly the way you would expect from two of the American undergrounds premiere iconoclasts.