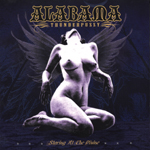 A few years back, Virginia's Alabama Thunderpussy were toiling away in the underground, signed to the now-defunct Man's Ruin label. Man's Ruin was a long time home to a number of bands within the 'stoner rock' subgenre of heaviness, and with the growing appeal of stoner rock thanks to the likes of Kyuss, Fu Manchu, Orange Goblin and Nebula, it came as a surprise when word spread that the label had suddenly dissolved. Almost immediately a number of talented, hard rockin' bands were left without a home, some never to be heard from again. Flash forward to today, and Alabama Thunderpussy find themselves on Relapse - in itself a surprise due to the label's longtime commitment to death and grind metal. It's good to see Relapse taking a chance on something a little different...Staring At The Divine is the band's label debut and it shows them returning with a thunder. Kicking off with "Ol' Unfaithful", Alabama Thunderpussy take you on a memorable 10-track rollercoaster ride of southern-fried hard rock, featuring hard driving riffs, twin-guitar harmonies, and a bottom end resembling that of an incoming jet engine. Toss in the odd handclap makes Staring At The Divine the most enjoyable hard rock record I've heard in ages. As the second track "Motor-Ready" kicks into high gear, I realized just how good this music sounds really, really loud. Frontman Johnny Throckmorton is all over the map stylistically, from the ferocious "Shapeshifter" to the banjo-driven "Amounts That Count" which wraps up the record. Staring At The Divine was originally produced by Billy Anderson (Melvins/Sleep), and while the band later re-mixed and re-recorded portions of the record, the sound is polished and rumbles along with potent results. If there's anything negative to say, it's that some may find this genre of heavy music monotonous, and for that, Staring At The Divine doesn't exactly offer anything new. But there's more than enough here to please anyone that's into no-frills, heavy, workin'-man's rock. Call it stoner rock, or call it moonshine metal, but crack open a cold one and enjoy this record at maximum volume! RECOMMENDED TRACKS: "Motor-Ready", "Esteem Fiend", "S.S.D.D." - James O'Connell, CHRW Radio, London, ON