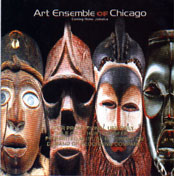 It's been a fruitful three decades for this quartet, founded under the motto "Great black music: ancient to the future", and for a group that got its start during the heyday of the free jazz discovery of the mid to late 60's, they remain remarkably fun-loving and down to earth. The AEC has always made a concentrated effort to incorporate elements of the entire African music diaspora: from traditional tribal rhythms to R&B to calypso. On Coming Home Jamaica, their 38th release, the quartet has tossed in substantial amounts of reggae to liven up the party. Initially, the solid, syncopated rhythms of bassist Malachi Favors and drummer Famoudou Don Moye come across as disorienting, mostly because they are so steady. If one is expecting a freewheeling, time-signatureless romp, their strict linearity can catch one off guard. But it's only occasionally, due to their prominence in the mix, that they actually serve to distract from the twin horns of Roscoe Mitchell and Lester Bowie. When the rhythm section fades back (as they do in the all too-brief "Jamaica Farewell") and allow the horns to emerge, the beauty can take your breath away. In these pieces, Bowie plays his trumpet muted, almost hesitant, sounding like a late-fifties Clark Terry, while Mitchell himself eases himself almost unconsciously through his solos. All in all, this won't wind up being listed anywhere as the AEC's finest moment (for that, I'd lean instead towards People In Sorrow, or their 1990 tribute to Monk, featuring Cecil Taylor, Dreaming Of The Masters), but contains enough solid moments and fine interplay between seasoned musicians to impress most jazz fans.