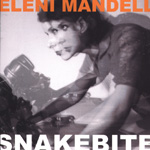 The comparisons come thick and fast when critics get to talking about Eleni Mandell: the usual suspects being Patsy Cline, Polly Jean Harvey, Lucinda Williams and, inevitably, Tom Waits. The Waits comparison is the most apropos: Mandell is a self-confessed Waits-ophile, who was mentored by Chuck E. Weiss, Waits' "sidekick". Apparently, Mandell even used to play Waits covers for the patients at her dentist dad's office. They were, unsurprisingly, not terribly amused. However, for those who would find the prospect of Waits at the dentist not only a great relief from the usual garbage that accompanies dental work (and, it seems, much of modern life), but positively pleasant, Mandell's third album will come as a revelation. The Waits sound is very evident in songs like "The Man In The Paper Hat" and "Dutch Harbour", both of which feature Melora Creager on cello (the former also features a deliciously mournful trumpet solo). "Close The Door" and "Digging A Hole", the tenth and eleventh tracks respectively, are perhaps the most obviously Waits-esque tracks on the album. "Close The Door" boasts a Rain Dogs-era, faintly circus-like bassline and keyboards, whereas "Digging A Hole" shows off Mandell's more country side, complete with slightly off-kilter violin and guitar; in both cases, one could easily imagine Waits' growl replacing Mandell's vocals. Which brings us to her voice. The links drawn to other highly distinctive female singers are appropriate, but in a more general way than with Waits. Mandell herself says that when she started singing, she decided she didn't want to "sound like a girl", which is evident in her work. Her voice is certainly more mellifluous than Waits', but that is not to say it isn't powerful. Like PJ Harvey, Mandell is not afraid to stretch her voice a bit, thankfully forgoing extreme histrionics but not always trying to sound sweet and melodic, as evinced by the title track and the last track, "Madhouse", both of which recall Harvey's intense delivery. Eleni Mandell certainly richly deserves to be placed in the company of the most interesting female vocalists and Snakebite should also appeal to those who are looking for innovative female voices. Ultimately, though Mandell's work invites comparison, it is, thankfully, inventive, original and exciting enough to avoid being swallowed up by its similarities and influences. RECOMMENDED TRACKS: "Dreamboat", Don't Lose My Trail", "Digging A Hole" -Rachel McArthur, CHRW Radio, London, ON