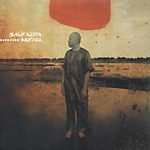 I often think that people who are born pretty are actually born cursed. Because they are often easily accepted, they are less likely to have to develop funky quirks in order to get attention. Take me, for example. I'm sort of average - relatively good face, hair, and an otherwise proportionate body. Boobs on the large side, but hey, everybody's got something to beef about. Not growing up as one of the "pretty girls," I've developed weird and sometimes obsessive traits (like origami and puppet making) in order to get attention. Not having been born into a niche, and having to make one myself, has become what I love best about being alive. I think Salif Keita would agree. Maybe this has something to do with growing up albino in a country where albinism is a curse. Being born a black albino (his skin is greyish) in Mali meant suffering large amounts of ridicule, bad treatment, and blacklisting, never mind being seen as having evil powers. Just as blind people develop acute memories of touch and sound, perhaps socially outcast people develop alternate worldviews. Diversity, in this case, becomes incidental. (And finally, something good comes out of rejection!) There is definitely a sense of urgency in Keita's worldview, the origins of such I will not speculate. Because to do so would diminish from what Keita fights for: a reappraisal of the resources of the here and now, specifically, those of Africa. More than anything, he says, the fact that Africa is underdeveloped will never be altered if the people who live there don't take happiness into their own hands. He spends a lot of energy encouraging people to look at their lives less in terms of weight than lightness. This is wise advice. Moffou seems to be more of a celebration of this worldview than a call. Combining several different artists - everyone from Cesaria Evora to Ray Lima appears on the disc - it sounds like a more acoustic N'Java. Keita's voice is soothing. There is a dryness to it, but also a strength. The first few songs are the best, in my opinion, if only because the rest of the CD starts to fade into the background. There is a sense of contemplation to this album, but also a sunny, pretty-young-Malian-girls-singing-in-the-background tone as well. All in all, Moffou is an album of feeling, coming from a guy who definitely does a lot of it. RECOMMENDED TRACKS: "Yamore", "Madan", "Ana Na Ming" - Shannon Doyle, CFBU Radio, St. Catharines, ON