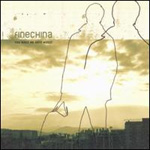 With NME's recent proclamation that The Smiths were more influential than The Beatles, one can sense that early-80s guitar rock is not only being revisited, but is being re-assessed with the fogs of nostalgia firmly in place. It only takes a cursory glance at today's borderline mainstream scene to realise that the up-and-coming genre known as "emo" is essentially just The Cure and Joy Division for the pop-punk generation. However, though Fine China incorporate elements of the afoorementioned bands, along with The Smiths and Echo & The Bunnymen, the band doesn't bastardize the doom 'n gloom of '82 like A New Found Glory or Saves The Day do. Fine China actually replicates the sound. The most impressive aspect of You Make Me Hate Music isn't necessarily in delivery (how they get those guitar, snare and production tones to sound so fantastically retro I'll never know), but in substance. The band's last record - 2000's When The World Sings - logged considerable amounts of air time with me because the songs were just damn great. And while this time the electro Depeche vibe of yore is replaced squarely with guitars, the songs are well-crafted, subtle (when they have to be), and over-the-top (again - when they have to be). These are tunes that can be spun again and again, like those endless raindrops on grey, catharsis-searching days. RECOMMENDED TRACKS: "Don't Say Nothing", "Hug Every Friend", "Rock Can't Last Forever" - David Perri, CHRW Radio, London, ON