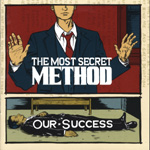 The Most Secret Method ( )

In music, there's a thin line between acknowledging your influences and appropriating them wholesale, and Washington, DC's The Most Secret Method are walking that line with eyes closed, breath held, and arms outstretched. The influence in question - like so many DC-based bands - is Fugazi. Granted, they're an almost immovable musical force in that community and are as intrinsically linked to their hometown as, say, The Ramones were to New York's Lower East Side. But regrettably, too much of M.S.M.'s second full-length, Our Success, comes across as bald-faced imitation. In some ways, The Most Secret Method succeed in creating something that many Fugazi fans have craved for years: an amalgam of many of their ever-developing styles. A cursory listen to Our Success reveals the pummelling rhythm sections heard on Repeater and Steady Diet of Nothing coupled with the abstract melody lines and studio experimentation of Red Medicine and End Hits. They lack, however, the conviction to make this a cohesive body of work. Too often, the flow of the album is jarringly interrupted by the inclusion of on-stage mumblings, answering machine messages, and extraneous studio banter. The low point comes during "The Year 3000" - a minute-long live excerpt where guitarist/vocalist Mark M100 dramatically intones, "This candle is more patient than me/But despite my bones, we are the same/Delicate, dependent, and finite/The black hole will consume us all." Pukingly pretentious. Our Success is far from a total writeoff, though. The trio are extremely talented, can create riveting choruses (see especially "Daggers"), and their attempts to incorporate elements of dub and Gang of Four-styled angular funk - while a bit ham-fisted - should be encouraged. Were they to abandon DC altogether for the less musically-derivative climes of, say, Bangor, Maine or perhaps exciting Petaluma, they could probably create some decidedly innovative and challenging music. But growing up with the essence of Fugazi enveloping them like a fine mist, it's tough not to inadvertently sweat some of that same essence out. RECOMMENDED TRACKS: "Louise Lake", "Dagger"