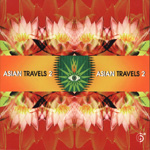 Asian Travels 2 is a collection of mostly downbeat ethno-techno music, and generally speaking, it's more appropriate for background music than for intense listening. This is today's equivalent of the exotica movement of the 1960s, and its stars include Talvin Singh (not present on this album), Karsh Kale, and DJ Cheb i Sabbah. The focus of Asian Travels 2 - much like its predecessor - is on Asian countries like India and Pakistan, rather than China or Japan. Techno crosses over into the realm of qawwali and bhangra to produce a complex album that is pleasant but nonobtrusive. Tablas and sitars meld seamlessly with drum and bass rhythms. Standout tracks include "Red Earth" by Outside (melancholy but hopeful breakbeat), "Aaja Re" by MIDival PunditZ (featuring the gorgeous voice of Bollywood star Lata Mangeshkar), and Karsh Kales's "Deepest Blue (KK's Deepest Brooklyn Mix)" which is reminiscent of a slightly hip hop-tinged Passion-era Peter Gabriel. The album finishes up with some ambient tracks courtesy of Bob Holroyd (reminiscent of 808 State's "Bird") and DJ Cheb i Sabbah (extremely organic). RECOMMENDED TRACKS: "Red Earth" - Outside, "Aaja Re" - MIDival PunditZ, "Tum Bin Shyam." - DJ Cheb i Sabbah - Shantell Powell, CHSR Radio, Fredericton, NB