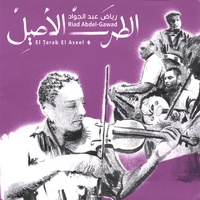 On El Tarab El Aseel, Riad Abdel-Gawad has concocted an amalgamation of the western classical training he acquired while studying abroad and the traditional Egyptian forms of his birthplace in Cairo. Rather appropriately, the album was also recorded and mixed in Cairo with an emphasis on using the traditional Arabic ensemble of five, known as the "takht". In this ensemble Abdel-Gawad plays the violin in plcae of its two-stringed ancestor known as the "kamangah". The remaining four instruments present on El Tarab El Aseel are indigenous Arabic versions of the lute, flute, tambourine and trapezoidal zither. It is from this highly traditional Middle Eastern arrangement that Abdel-Gawad chooses to navigate the peripheries of conventional Arabic composition.
Beginning with "Longa Nahawand" the full-bodied texture of the "takht" ensemble is briefly revealed before separating into a sparse atmosphere resembling loose improvisation on a compositional thread. This is a re-occurring element of the music throughout El Tarab El Aseel's four tracks. Adhering strictly to neither improvisation nor perfectly defined composition, the songs ebb in and out of unified themes. It is not uncommon for a highly structured section with all instruments playing identical melodic lines to leap unexpectedly out of a serene, nearly shapeless passage. However, this is not necessarily a negative; despite not always having a gradual build the contrasts give a taste of both the hypnotic and rhythmically lively aspects of Arabic music side by side. Within this relationship of pronounced alternations the percussive sections are typically the more memorable of the two, though it must be said that the improvisational moments can definitely be a welcome point of arrival for those with a leaning towards the meditative.
Aligned with the frequent contrasts between hypnotic and lively as heard on El Tarab El Aseel, Abdel-Gawad often creates quick transitions between different melodic modes. This technique is especially audible on "Sama’i Sultana Ayah" which closes the album with several nearly (though enjoyably) schizophrenic moments. To be more accurate, the interplay between instruments on this final track is closer in resemblance to a highly animated conversation among a group of people than that of a split personality. However, these exchanges are often so polarized that it is as if the participants do not share the same mother tongue. Interestingly enough, this ultimately works in the album's favour. As these songs are a representation of Abdel-Gawad's time spent exploring different schools of musical history, this type of musical dialogue between cultures is the ideal way to reflect his experience. In that regard El Tarab El Aseel is a definite success.