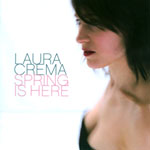 Although fairly young, Laura Crema has been well known on the west coast jazz scene for some time.  I first heard her on the disc Divas for Life Live at the Vogue!  She held her own while singing with the likes of Karin Plato, Dee Daniels and Kate Hammett-Vaughan.  I, therefore, had high expectations for this CD.  I was not disappointed.  She doesn't have the all-star big band to back her here, but she has chosen a group of talented musicians.  She thankfully hasn't taken a standard take on every song and has had the help of two jazz veterans. Producer/mixer Brad Turner seems to have the ability to get a great sound out of the artists he works with. He also provided some beautiful trumpet/flugelhorn accompaniment on some cuts. On my favorite track, Cole Porter's "So In Love," Turner's intro is short, but vital to the song and a couple of longer solos later in the same track punctuates the beautiful rhythms coming from Paul Rushka's bass and Nino DiPasqual's drums.  Bill Coon's guitar anchors the whole song and also compliment's Crema's voice on "Summer Nights", which is at a quicker tempo. Then, there's George McFetridge. A young vocalist probably couldn't get a better pianist/arranger than George McFetridge to help with such a project.  McFetridge, who is said to have composed over 500 tunes, is credited with piano/arrangements on four tracks, but his influence can heard throughout the album.  Did I mention it was Laura Crema's CD?  It is.  There are plenty of ballads on Spring is Here and a more vulnerable voice could not get away with such deliberate, slow phrasing.  In Rodgers & Hart's "Spring is Here", she does just that and  holds the notes for just the right amount of time and Turner excels on his horn.  She shows she's not afraid to take chances when she sings beautifully in Italian, on "Estate", with only Coon's guitar as backing and she climbs the slippery slope of using a deeper, bassy tone for the Beatle's "Blackbird."  It works. But this album has more than slow phrasing.  Crema shows that she can speed it up as well on the bossa sounding "New Day", the track she co-wrote with McFetridge.  Overall the feel of Spring is Here is somewhat dark and harkens back to dimly lit, smoky lounges in those black and white detective films from the 40's or 50's and many of the tracks could be considered as candidates for a film noir soundtrack.
There has never been a shortage of vocal mainstream jazz albums being released at any given time.  To have yours stand out is not any easy task, but Laura Crema has managed to do this with her second album Spring is Here.