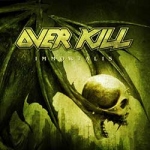 Unlike some of their high profile contemporaries, Overkill have remained surprisingly consistent throughout the past two decades, and Immortalis stays true to the band’s familiar thrashing grit. That said, even though their latest (their 15th full length original album) has the feel of a timeless classic it’s not likely to supplant triumphs like Horrorscope in fans’ hearts or playlists. Poundingly fast at the start (“Devils in the Mist”), Immortalis shifts from speed toward a bass heavy groove, bristling with scathing leads to tie it all together. Another shot of high-test fuel kicks up the tempo for the final assault, and the record ends in a glorious blaze, bracketing a few soft spots in the middle with two of the hardest hitting and most satisfying tracks. To Bobby “Blitz” Ellsworth’s ever throat-raking snarl, Overkill briefly adds an unusual guest appearance from Lamb of God’s Randy Blythe (“Skull and Bones”) – an appeal to a new generation of metalheads, perhaps? Aside from new drummer Ron Lipnicki the lineup otherwise features the usual offenders, right down to D.D. Verni’s unmistakable bass rumble. In the end this makes Immortalis a gratifying relief from musical trendiness but it’s unlikely to exert much longer lasting effects.