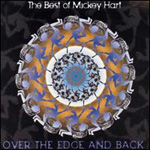 The Best of Mickey Hart: Over the Edge and Back
Rykodisc ( )

Percussionist/composer/producer/author/ethnomusicologist Mickey Hart, former drummer of The Grateful Dead, presents Over the Edge and Back, a retrospective spanning 25 years of musical experimentation and exploration. Gathering together previously recorded materials, Hart re-encapsulates the essence of his artistic odyssey into one dynamic audio-showcase. This "Best of-" compilation opens with the song taken from Hart's most recent new-age release Supralingua, "Angola", an evocative instrumental track which signals to the listener that they aren't in Kansas anymore. Carrying on from there, the disc flows into the seductive and optimistic "Where Love Goes" sung by the London-based group The Mint Juleps. I do declare, that this is one beauty of a track, with pure vocals and an African sway to it. Drawing on a lifetime of experience, Hart has rounded up a collection of diverse material from his numerous solo and collaborative performances around the world. One of these significant side-projects is known as Diga, a self-described 20th-century rhythm orchestra. Featuring the lightning quick beats of tabla virtuoso Zakir Hussain, Diga is the source of the album's fourth track "Sweet Sixteen." Another compelling cut entitled "The Compound" was one of many Hart composed for the percussion-based soundtrack to Francis Ford Coppola's Apocalypse Now. Turning his studies ever inward, Mickey Hart has taken the shaman's path to spiritual enlightenment, as documented in his memoirs "Drumming at the Edge of Magic" and "Planet Drum," and the complementary CDs that accompanied them. Indeed, the theme of this new album is very much in keeping with Hart's visionary quest to conjure the ancient metaphysical roots of his musical soul. RECOMMENDED TRACKS: "Where Love Goes", "Call To All Nations" - Christine Leonard, CJSW Radio, Calgary, AB