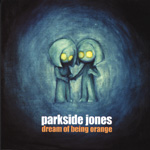 Dream of Being Orange
Moondata ( )

I have been a big supporter of band democracy since my first spin of Sloan's Twice Removed. I consider it to be one of the penultimate examples of what good can come when everyone takes control for at least one tune, especially when everyone involved has a different approach to the same end. This approach works well for Parkside Jones's Rhyna Thompson and Matthew Lederman as they trade the driving responsibilities on their debut EP Dream of Being Orange. Along with some fantastic grooves from bassist Peter X (not to be confused with Rocket From the Crypt's Petey X), Parkside Jones offers up songs such as "Tantalized", which starts as a piano lick sung in a quirky cadence by Thompson and neatly adds layers in a gradual build to a slow-beat funk tune. This is surrounded by more up-tempo numbers such as "Disconnected" which puts Lederman in front of the microphone and further showcases Thompson's range of abilities with some great trumpet accompaniment. By including a little jazz, a little funk and a little soul, I find myself comparing Dream of Being Orange to the works of Bass is Bass and Bullfrog. In fact, if I have any complaints at all about this EP, it's that I can't help but feel like I've heard it before. Perhaps the glut of jazz/funk/soul hybrid releases that I've been feeding myself lately are starting to reach some sort of saturation point. Despite containing only four original songs it's very apparent that Parkside Jones knows how to let everyone be heard, and Thompson's wide range of instrumentation really makes this disc work. It makes for a really well rounded sound rather than one person's atonal vision. Dream of Being Orange shines regardless of who's driving and who's riding shotgun. RECOMMENDED TRACKS: "Disconnected", "Tantalized", "After X"