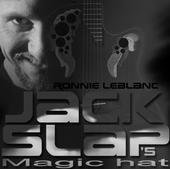 When you plug into Jack Slap’s Magic Hat, the new disk from Toronto born Ronnie LeBlanc, you better be ready to make a choice between strapping in or strapping on.  It is clear that “safety first” is not Leblanc’s motto, either for himself or you the listener.
With his slightly maniacal vocals he takes you on a wild ride of unapologetic should’ves of bad habits and wishful choices in “6ft deep”. His hard driving, straight ahead rock sensibility delivers a swift triple combo of tunes dealing with drinkin’, trains, and mama so effectively that you’re ready to do a two foot stomp down the lost highway with him.  “Carry me” is a ballad entwining acoustic and electric grooves seamlessly, that underpin longing and plaintive lyrics  which could have women ignoring their inner radar and flying with the heart.    The songs give you a niggling sense of familiarity, yet they are dealing with modern social commentary and observation that come from another’s lens.  Nothing is watered down pablum here.  Jack Slap’s Magic Hat, with each song illustrates LeBlanc’s fearlessness to experiment with layers of sound, which envelop and coax to life his words.  It is his unique writing that sets him apart. The eastern feel in both vocal and guitar of “An Ancient Truth” can mesmerize you, like a mystical snake charmer and “The Empty Anti Christ” whiplashes you into the exposed  underbelly of a dark world, leaving you with nothing to do but look in morbid fascination and contemplate your mortality.
This album has much to offer in musical styles, yet it is blended in a unique progression.  You are led down the Ronnie LeBlanc path, feeling a bit defiant, a bit dangerous, and a bit dirty.