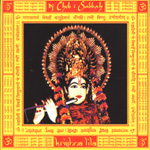 Cheb i Sabbah is an Algerian-born DJ who traveled the world learning and experimenting with many musical styles before settling in San Francisco. His music has been described as "a mesmerizing weave of classical virtuosity and floor-shaking beats," and incorporates music from around the world. Krishna Lila is Cheb i Sabbah's third album combining electronic rhythms with the traditional sounds of India, and this one focuses on two considerably different devotional styles. The first half of the album concentrates on the Carnatic style of southern India, and the second half on the Hindustani style of the north. Cheb i Sabbah actually spent two years touring throughout India in preparation for this album, learning the varied musical styles, and recruiting some of the best musicians. The songs of The South portion of Krishna Lila are generally more radio-friendly, being of standard song length and having more modern elements, while the songs of The North are longer, and more traditional in style. All tracks have a variety of Indian percussive instruments, with three tracks featuring Karsh Kale on tablas. Bill Laswell plays his signature bass groove atop five of the tracks. The first three tracks of The South feature Baby Sreeram singing, and her group playing violin and percussion. "Maname Diname" is one of the highlights of the album, where Baby Sreeram sings over heavy, rhythmic percussion. Modern percussion soon enters the song, making it one of the three more dance-oriented tracks. A.K. Devi plays the vina - a stringed sitar-like instrument - on the last two songs of The South. Another outstanding track is "Raja Vedalu," which starts off with the vina, slowly building up more and more percussion, and even some drum n' bass beats, while hypnotizing Vedic chanting blends in and out. Radhika Rajiv adds her beautiful voice to two songs of The North, and is backed by a wide variety of instruments. "Rupa Tujhe Deva" is a nine-minute slow-rave song, where Laswell's rumbling bass and Kale's tablas accompany Rajiv's singing. "Tum Bin Shyam" is another rhythmic song where the melody is played on the santur, a plucked string instrument with a very pure sound. RECOMMENDED TRACKS: "Raja Vedalu", "Maname Diname", "Rupa Tujhe Deva", "Tum Bin Shyam" - Colin Wilson, CHSR, Fredericton, NB