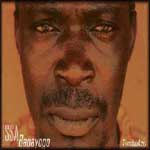 Sometimes it feels like artists that start integrating electronic sounds into their traditional styles often just turn themselves over to a DJ and abandon their artistic judgement to a promise that this new "music" will sell. For example, you can tell that Ravi Shankar doesn't believe in the product when he turns over the rights to his brand new, blood-and-sweat sitar album to Mr.-DJ-Makes-You-Popular-With-The-Club-Kids. On the other hand, there are artists who take new instrumentation into their own hands and as a result, come up with entirely coherent and visionary approaches to music. Issa Bagayogo definitely fits the latter category. He approaches non-traditional ways of producing sound with the confidence of the historical, and fully utilizes his own judgement of what his music should sound like. Timbuktu works mainly because it is a personal blend of old and new; and all of the instruments combine on their own terms. I've often thought that true "style" happens accidentally, as a result of the natural forces of unconscious judgement as to how things should fit together. Bagayogo's latest album definitely feels shaped by this process. While some people have compared his work to other such Malian greats as Oumo Sangare, Habib Koite and Ali Farka Toure, Bagayogo takes a less traditional, but no less genuine, approach to creating music. Either way, the forces of coolness have worked their way in, and stayed there. This cd is the kind of album I listen to when I'm painting sets or making masks: when I need something that feels acoustic, worldly, and keeps me going at the same time. For anyone who likes the guitars of Ali Farka and the energy of Baaba Maal, Timbuktu is strongly recommended. RECOMMENDED TRACKS: All of them!