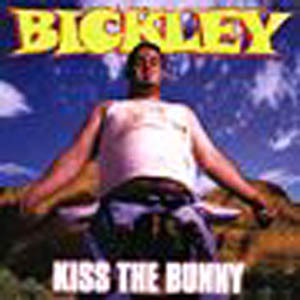 I have trouble with Bickley 'cause on their last CD (Pogo-Au-Go-Go), they mutilated a Jawbreaker song. They tried to cover "Boxcar" and just fucking destroyed it and for that they'll never be forgiven. But onto their latest CD, Kiss The Bunny...well they sure haven't changed much. They're still playing fast, snotty, juvenile punk rock. The most obvious reference point might be The Vindictives, or maybe some of those Fat/Epitaph bands that everyone loves. The fact that they slightly sound like The Vindictives might have excited me a few years back, but I rarely listen to them now, let alone all the shitty bands trying to emulate them. Every city a band like Bickley, complete with the seemingly mandatory dumb cover songs that they destroy. If you're really bored and find yourself holding a copy of this CD, take a gander at the lyric sheet. They have one of the worst looking inlays I've seen in ages, especially considering that Fearless has a few dollars in their pockets. Either way, they probably shouldn't print their lyrics as it exposes them as lame and juvenile dumbasses. I mean, why write a song about your friend fucking a hole in the wall? Bickley and bands of their ilk will always exist for 15-year old punx to jump around to, but that doesn't mean I have to listen to it.