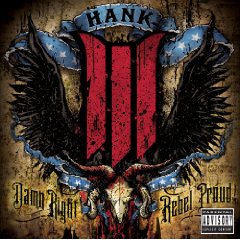 This is not an album to listen to while drinking alone. On his fourth release, Damn Right Rebel Proud, Hank III packs a depressing punch with more whiskey-soaked country ballads than his previous album, Straight to Hell. With songs about child abuse, loneliness, living fast, getting drunk, suicide, and not caring what anyone thinks, Damn Right Rebel Proud can best be described as drunk and depressed, with a big dose of middle-finger cow-punk attitude for good measure.

The first number on the album, “The Grand Ole Opry (Ain’t So Grand),” evokes the controversy surrounding Hank III’s grandfather, country legend Hank Williams, who was dismissed from the elite Nashville country music club in 1952 in order to allegedly “sober up.” He died a few months later, in 1953. The second controversial tribute song on the album is the ten-minute long “P.F.F.,” dedicated to the late G.G. Allin. It’s a foul-mouthed song, loaded with fist and fury. But the best tracks on the album are probably the speedy country-punk crossovers – what Hank III does best – including “6 Pack of Beer” and “Long Hauls and Close Calls.” Bob Wayne, from Bob Wayne and the Outlaw Carnies, also wrote the final track, “Workin Man,” which is also a goodie. Put those ones on your mix tapes, and leave the ballads for the “pick up the gun dear / and put me to sleep” moments.