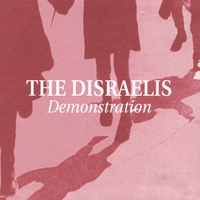 Over this last year a re-emergence of shoegaze has become unmistakably identifiable on the landscape of indie rock. Though new methods of achieving this gauzy atmosphere have developed, the most common still remains as the tried and true dominion of digital delay. On their Demonstration EP Toronto's Disraelis make full use of this technique and come up with results as solid as shoegaze itself is amorphous.

"I feel so young inside" sings bassist/vocalist Cameron Ingles on opening track "The Bitter Ash" and it sounds like nothing could be further from the truth. Choosing a disheveled swagger as his aesthetic, Ingles steers Demonstration away from the blissed-out innocence typically found in shoegaze's faceless delivery. Guitarist Colin Bowers works to reinforce this with a choice of picked notes instead of strumming's blurry sonic sea and it quickly becomes clear that this is a song dressed in a texture; not texture dressed up as a song. This working method makes itself apparent on all of Demonstration's five tracks and the drumming of David Barnes is no exception. By avoiding any abstract, free-form explorations Barnes' straight-ahead playing keeps everything moving forward and away from the shapeless drift of more definitive shoegaze. In this regard The Disraelis could almost be classified as a somewhat melancholy Brit-Rock group having a strong penchant for digital delay pedals.

Taken as a whole, Demonstration offers a strong set of songs differing little from track to track. Although "In Memory" follows opener "The Bitter Ash" with a much lighter, optimistic tone, and fourth cut "Distance" reels in the ghosts of Steve Lillywhite-era U2, the EP's five songs cover little territory; none of which is uncharted. To deliver such evenly measured doses of a proven idiom is no crime, but ideally The Disraelis can push into more dynamic realms on future releases. Perhaps such an evolution would naturally develop on a full length. Here's hoping.