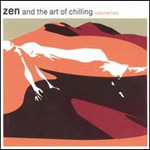 The second installment in the Zen & the Art of Chilling series is vastly superior to its predecessor. The first CD was mostly boring, with only a few standout tracks, but this time around, it's mostly excellent tracks with only a couple boring ones. Middle Eastern and North African rhythms and instrumentation dominate as Turkish, Algerian, and Egyptian music seem to be the new trend, usurping the electronic-tinged bhangra and qawwali of India and Pakistan. Vol. 2 opens with the gorgeous vocals of Natacha Atlas backed by Transglobal Underground. "Ana" is a beautiful a slow piece, and is ideal for the taxim section of a raqs sharqi routine, or for just chilling. Balthazar's "Gypsy Tears" follows, and although it isn't one of my favourite tracks, it has its moments. Sad Rom violins pair with worldbeat keyboards and percussion to make at the very least, pleasant background music. "Un Ange en Paix" is next, by Amina featuring Zohar. Although I didn't care much for either of their solo albums, I appreciate the work they do together. This track sounds much like Algeria meets Paris. The music (and lyrics) are very French cafe, but the singing scale is Arabic. Jah Wobble and Bill Laswell follow up with "Radio Axiom (Alsema Dub)" which has a happy, African sound to it with the expected heavy background bass. The next few tracks are trip-hop tinged with various world music. Robert Miles' "Paths" is trip-hop with a Gypsy feel. Its an interesting pairing of sounds, and the vocalist reminds me a little bit of BjÃâÃ¢â¬ï¿½rk. FJ Rehmi's "Invisible Rain" also has a trip-hop sound, but paired with Indian tablas and sampled voices. Although it's not a bad song, it's far less interesting than "Paths". Boyb Holroyd's "The Spaces In-Between" also uses a trip-hop rhythm with Chinese music and jazz. It's most effective when the Chinese music is predominant. The rest of the time, it feels more like new age world muzak. Emma Shapplin's "The Inferno (Galactic Caravan Mix)" also mixes the by now standard rhythms with soaring medieval vocals. The effect is very similar to the music of QNTAL, and is easily one of the best tracks on the album. The last song, Dragon Chai's "Scent of Time" reminds me of Deep Forest with its hopeful, upbeat rhythm and aboriginal mixed with Chinese stringed instruments. It's a total melange of world styles mixed with the ever present trip-hop rhythms. RECOMMENDED TRACKS: "Ana" - Transglobal Underground, "The Inferno (Galactic Caravan Mix) - Emma Shapplin", "Un Ange En Paix" - Amina feat. Zohar