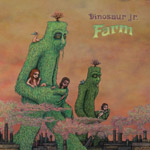 Dinosaur Jr continue to perfect their sound on their first release for Jajaguwar Records. The chemistry of the group really shines on this latest album which is often as moving as it is rocking. “Pieces” opens up the record brilliantly, featuring J Mascis’ bright open guitar chords behind the pounding rhythm section of Murph and Lou Barlow. In a little over four minutes, the song deftly sweeps through angular verses, a gorgeous chorus and, of course, an excellent solo from Mascis, who truly affirms his status as a living rock god on Farm. Many guitar solos extend for minutes on Farm, all of which display J Mascis’ incredible talent and true gift for melody in his fretwork. There is little wanking here. “Plans” is the sweeping epic song on this record, featuring some of Mascis’ best vocal work ever and his most darkly pained since “Out There”. His voice has only gotten better with age, almost like its been designed to improve with weathering, and it displays great depth. The sweet gentle guitar chords that open “Plans” seem quite vulnerable and its easily one of Dinosaur’s more melodic and tender songs. However, for the most part, Farm is just as noisy and rocking as fans of the group have come to expect. “There’s No Here” features cacophonous drums and blistering guitar work while “I Don’t Wanna Go There” is a full-out noise-fest. “See You” is the distance cousin of “Pond Song” while “Your Weather” contends to be Lou Barlow’s finest moment with Dinosaur Jr. The album does sag a little in the middle, “Friends” smacks a little too much of “Been There All the Time” from Beyond, but that’s to be expected for an album that’s slightly over an hour long. For the most part, Farm succeeds on every level and is certainly one of the best albums under the Dinosaur Jr name since Bug.  8 out of 10.