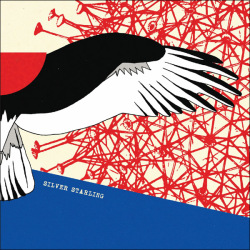 Montreal-based indie-rock five-piece Silver Starling aren’t afraid to get personal. Their self-titled debut is a rich mix of vulnerable vocals, lingering guitar riffs, and textured stadium-rock sounds that plays like a confessional from the outset. In the opening track “Something Over Nothing,” lead singer and main songwriter Marcus Paquin repeatedly chants “come break my heart” in a hushed, faintly trembling voice. It’s a fitting opener that introduces the themes of pain, loneliness, and longing that resonate throughout the album.
Although the album fixates quite heavily on the gloomier side of things, Paquin’s delicate vocals and sincere lyrics, combined with the at-times dense instrumental layering, make the songs feel more like powerful, cathartic releases than mere moments of brooding. And the catchy, upbeat, and even danceable tune “Ghosts” provides a much-needed break from the darker tracks halfway through the album.