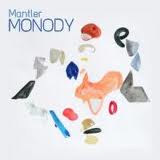 Toronto’s Chris A. Cummings, a.k.a Mantler fourth CD entitled Monody is something of a genre jumping chameleon album that leaves the listener wondering on the artist’s direction or is he simply creating his unique niche in music. With numerous shifts in tempo, style and instrumentation, it feels as if you are listening to someone’s experimenal trip into musical oblivion.

It could be very likely it is the music, a mixture of easy listening interwoven with low levels of electronic groves, that is a bit heavy on the Wurlitzer, sleepy time vocals and inconsistent tempos. The album contains a bit of everything, with sharp contrasts and hard to understand lyrical meanings, yet has a sort of classy hard to pin down direction.

The first track “Fortune Smiled Again” started off with a faint hint of Steely Dan sprinkled with a vocal hint of Frank Zappa on Joe’s Garage that soon disappeared into a mind numbing intro of a ringing clavinet and muddy sounding drums. If this was the intent then he pulled it off. But the listener is lost from the very beginning about what they are actually hearing and the story he is trying to tell.

It is not so different with the second and subsequent tracks where vocals seem at times forced and not completely hitting their intending mark on the scale.

On the slow moving, seamingly never-ending tracks of “Mount Shasta” and “Crying at the Movies”, he sounds like he not only is boring himself (and the listener) but really grasping for actual lyrics to complete the song. Rather than singing it seems like the words are actually being recited, somewhat like an actor.

The track, “Fresh and Fair”, injects some actual life into the album where Cumming’s vocals, accompanied by an appeasing instrumental backdrop, become quite effective. The lower range registry comes off strong and riddled with confidence on this groove tune.

Monody is certainly like a candy grab bag from the store, never knowing what you are going to get until you get home. However despite the monotonous trudging through the songs that is sometimes required, there is some musical craft dedication even on the albums many weak tracks. Further time spent on moderate tempos and soulful riffs would have made this a worthwhile CD.

Overall the album left me someplace in the dark not knowing what was going to be heard next.