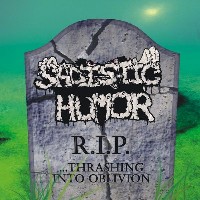 Canada contains a wealth of bands rarely heard outside of their hometowns or forgotten by the towns they were fortunate enough to tour through. Lately, the new trend in the blogosphere is to post demos of bands that have long since disappeared, but with R.I.P. ...Thrashing Into Oblivion this same idea has been put into CD form (how old school!). According to the notes enclosed, Sadistic Humor released 4 cassettes and this release compiles the best of those cassettes as well as some unreleased. Having never seen Sadistic Humor all I had to go on going in to this release was the title, which is fairly fitting. If Sadistic Humor were around today I’m pretty sure they’d be very appreciated by the folks who remember thrash for what it was, and couldn’t care less about the majority of the bands in the new thrash revival. Even though the songs feature different singers, the band manages to cross over quite a few boundaries but still stay within the realm of ‘thrash’. If I were to pick a ‘favourite’ singer I’d have to go with final singer Ian McLaren who was with the band in its final days. The music and vocals on the Transload (1993)recordings see the band going in a more progressive vein, with more melodic vocals than the cross-over vocals of Trevor Mason era recordings (2 albums in 1992). It’s interesting to hear the band’s progression from party-punk thrash to the more serious progressive side at the end. While the songs aren’t award winning, they don’t have to be, this is history and it’s damn entertaining. My only complaint is that the songs are mixed together, not in a straight timeline which does make for a bit of a jarring listen at times.
All in all, this is something that could be appreciated just for existing. Too many Canadian bands have faded out of existence completely with no record of their work. Too many terrific bands have disappeared simply because no label was willing to put out a compilation of their work. Thankfully someone saw fit to do this with Sadistic Humor, hopefully it’s the start of a trend. Also, the band is pretty damn good! Metal historians, or just Canadian metal lovers, take note!