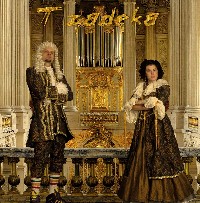 Tzadeka is an ambitious project that attempts to fuse elements of world music, jazz, electronica, and hip hop, into a heterogeneous broth of eclectic homogeneity. There are plethora flavours to the release that was four years in the making, and delivers the best of 30 tracks originally developed over the time since Tzadeka’s debut. Maigan Vandergiessen delivers enthused, throaty narration to a soundtrack that often sounds like a rockabilly klezmer band taking it slow, as on single “We are Wolves”.

Unfortunately, the ambition is a little over-reached for at times, and though there are certainly bright spots (piece is particularly front loaded), the back end has a feel that can almost get as dry as Vandergiessen’s voice can be deep and wistful.

A live set would be something, and it’s clear that a vast variety of talents have been corralled just so to create an atmosphere that aims to exist as a stand alone experience, not a reference to influence nor style, but perhaps there’s too much cut and paste to get them all on the same disc, where an organic swell might just do the trick.