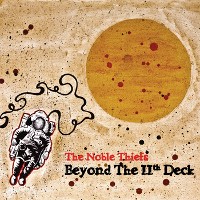 Back in December 2011, Winnipeg’s The Noble Thiefs played that city’s Pyramid Cabaret for their CD release party and for the next few weeks the city was all a buzz the band’s performance. Like the Toronto Maple Leafs, the band eschews the need for proper spelling (Thieves anyone?) and instead get on with making the music that they love. Beyond the 11th Deck is the band’s first release and one that combines rock and soul with a dash of reggae thrown into the mix.

In the wrong hands this mix of styles could easily be third rate filler to the greats of the sixties and seventies but The Noble Thiefs are able to make it their own. The female vocals of Chantal Emond are a treat on “She’s on Fire” as she echoes singer Myron Dean vocals. The organ groove gives “The Road” a sinister edge while the reggae lines of “Bleeding Out” recall The Specials’ classic “Ghost Town”. The Fats Domino - like piano brightens up “TTKACFM” with its “I ain’t afraid to die” refrain and horns thrown in for good measure.

With the summertime upon us, The Noble Thiefs’ debut is a good one to have for your next road trip. With much variety there is little need to skip tracks and provides many steering wheel tapping moments. Beyond the 11th Deck is definitely one for both a party and for the open road.